I will base my writing for a functional programming language and will use SML as my language of choice. Python, however, does not optimize tail recursive calls by default. And we are still bounded by default maximum recursion depth of 1000 (we can manually increase this limit). However, I will also write python equivalent code.

The above code that calculates the factorial of a given number n, requires stack to store all values of n unless base condition is met. So, if n is really big, we can see how stack space grows linearly with n. One way of solving this is to write the above recursive function using tail recursion. We call a function tail recursive if no computation happens after a recursive call. In our case the above factorial() function would look like

In this above program, we do not need to save the local variables as we did in the first program because they are not referenced after the recursive call. Hence, compiler can optimize the tail recursion and there’s no use of saving the current function’s stack frame. One way of thinking tail recursion would be as an iteration in disguise as used in imperative language. For example, this above tail recursion could be coded as

One thing to note is, ideally we would want tail recursion not to be bounded by maximum recursion depth. However, python has a default recursion depth of 1000 and we cannot go past this limit without increasing it. But functional languages do not have this limit.

Now let’s look into these concept in case of Fibonacci sequence.

. Some implementation ignores 0 and,

is taken as starting of the sequence. We will use the convention that 1 is the first element in the sequence.

We can see that numbers can get really big quickly. Hence, to generate

Fibonacci number, we might want to evaluate the performance of our algorithm even if it gives correct results for smaller value of

. Let’s see some approaches, their pitfalls, and improvements we could make.

A straight forward solution to calculate

Fibonacci number is to recursively calculate sum of

Running this python equivalent function fibonacci(35) took 4.0823 seconds in my computer.
If we analyze this function, we can see two main drawbacks of this implementation,

seconds in my computer. Here, we do not recompute previously computed results and also, stack space is constant and does not grow with the size of input n. For this implementation,

So, we reduced the exponential time complexity to linear and stack space complexity from linear to constant by using tail recursion and preventing duplicate computations.

Fun Fact: There exists mathematical formula we can calculate 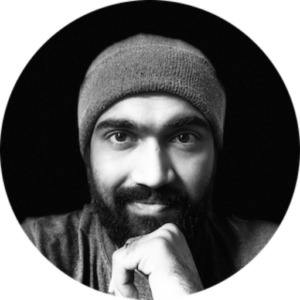